With many junior players only returning to football in 2022 for the first time since last kicking a ball in September 2019, Rygersdal Football Club are looking to a fresh organizational setup to kick-off their post pandemic plans.

Dr. Barry Busch, formally of Old Mutual Football Academy and Cape Umoya, re-joined the club at the start of the 2021 season and watched from a distance along with his long-standing football associate, Rushdi Harris.

Heading into the upcoming 2022 season, Dr. Busch faces the task – as Director of Junior Football – to create a formidable junior setup at the club he once led and where he is a life member. Harris, who has worked alongside Dr. Busch since his days at the Old Mutual Football Academy, will head up the club’s technical committee in his role as Head of Technical Development.

The new organogram allows the club’s executive committee to shift its focus on improving overall administration of the club while maintaining oversight on the club’s football activities.

“We want to continue on our quest to build a competitive junior setup able to compete in and win flagship tournaments,” said the club’s Junior Chairman Luther Muller. “Our work over the past few years has laid the foundation for Dr. Busch and Harris to come in and help us maintain what we have built and grow on our vision.”

The junior coaching setup will complement and work alongside the new senior head coach appointment of Ashley Hartog who is assisted by long-standing club member and member of the Technical Committee, Rory Simpson. Simpson has a rich playing and coaching history at the club and has been part of many of the club’s current junior players transition from mini football to the older age groups. Karl Ronnie and Grant de Smidt will also work within the senior setup supporting Hartog and Simpson while Thabo Mashologu will run an exciting new goalkeeper programme.

According to Chairman, Justin Asher, there is a sense of excitement in the air as the club sets about on this reimagined path.

Asher said: “We’ve been inspired by what other clubs have achieved and started to work toward. The covid pandemic has allowed us to consolidate and rethink this club’s ambition and strategy. One of the most important things we realised is that we need to focus on the future and build processes, systems and structures that offer sustainability and longevity so that we build a club capable of running itself without reliance on one or two individuals.

“We can’t ever lose our identity, because that’s at the heart of everything we do, so ensuring we are a community-driven football club will always be a big part of our culture whether it’s at playing, coaching or executive committee level,” he concluded.

Members will be informed of registration fees and open days to complete registration paperwork in due course.

COME TOGETHER TO HELP OUR FAMILY 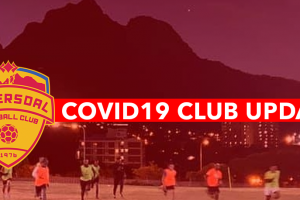 Our club newsletter is currently on hold due to coronavirus. Please refer to our latest news for any updates you may have missed or subscribe to our Club Information Portal below.

There are no upcoming events at this time.

The club is often approached by players to assist by discounting fees. If any player/parent would like to sponsor either a player's fees, or team costs (kit, equipment, etc), please contact exco@rygersdal.co.za